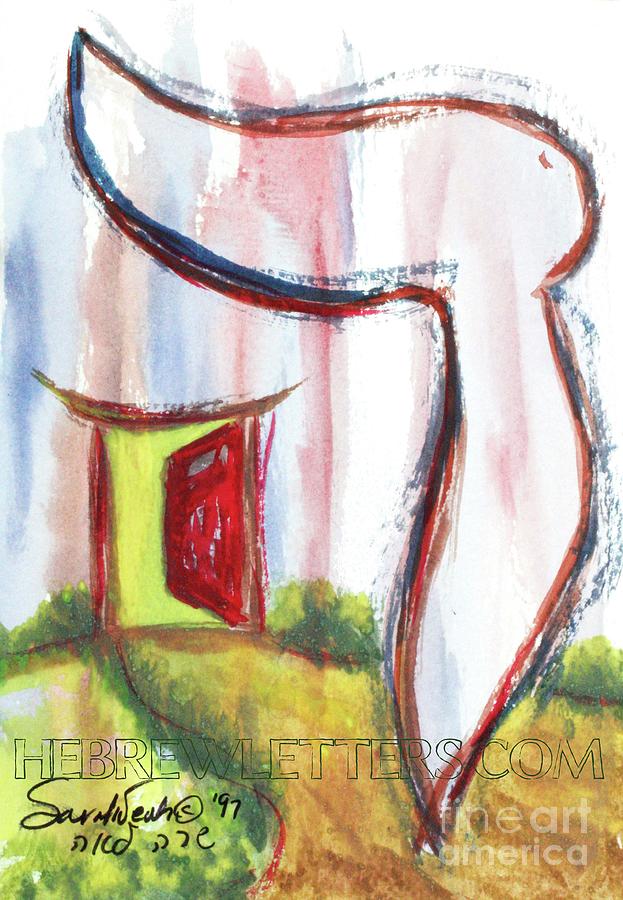 The Hebrew letter featured in this painting is the DALET.

DALET is the 4th letter of the alphabet, has a numerical value of 4, means DOOR and makes a sound like the D in Delight. The Dalet has the shape of an open consists of two lines, one from right to left on top. And the other straight down on the right side. The first line connects Dalet - Wisdom to Chesed - Love while the second line connects Chochma [ Wisdom] to Chesed. The vowel associated with Chochma [Wisdom] is a Petrach while Segol is associated with Chesed. The word Dalet means DOOR, while the word Petach means OPENING. Since Chochma [Wisdom] represents our high perception of the Divine, it is the opening of God that enables Him revealing Himself. Segol is related to the word Segula, a remedy that works for no apparent reason. Segol thus parallels the giving of Chesed, which gives freely, even without reason (Kaplan, Aryeh. 1979. Tr. The Bahir. York Beach: Samuel Weiser. 113).

Talmud -
Gimel Dalet, show kindness to the Poor [Gemol Dallim]. Why is the foot of the Gimel stretched toward the Dalet? Because it is fitting for the benevolent to run after [seek out] the poor. And why is the roof of the Dalet stretched out toward the Gimel? Because he [the poor] must make himself available to him. And why is the face of the Dalet turned away from the Gimel? Because he must give him [help] in secret, lest he be ashamed of him. (Shabbat 104a).
It has been taught: Symmachus says: Whoever prolongs the word ehad [one]. has his days and years prolonged. R. Aha b. Jacob said: [He must dwell] on the Dalet (Brachot 13b).
When he [a proselyte] went before Hillel, he accepted him as a proselyte. On the first day, he taught him, Aleph Beit

Our Rabbis taught: A certain heathen once came before Shammai and asked him, How many Torot have you? Two, he replied: the Written Torah and the Oral Torah. I believe you with respect to the Written, but not with respect to the Oral Torah; make me a proselyte on condition that you teach me the Written Torah [only]. [But] he scolded and repulsed him in anger. When he went before Hillel, he accepted him as a proselyte. On the first day, he taught him, Aleph, Beit, Gimel, Dalet ; the following day he reversed [them ] to him. But yesterday you did not teach them to me thus, he protested. Must you then not rely upon me? Then rely upon me with respect to the Oral [Torah] too. (Berachot 31a).

Abaye also said: The Dalet of tefillin is a halachah of Moses at Sinai (Shabbat 62a)

Zohar
The conjunction of the two letters Gimel and Dalet, Gimel is giving and Dalet is receiving (Zohar . 1984 Tr. Harry Sperling et al. New York: Soncino 1:244b).
Four is a very important number in Kabbalah. There are four worlds: Asiyah, the World of Action; Yetzirah, the World of Feelings or Emotions; Beriyah, the World of Creation; and Atzilut, the World of Emanation; four souls associated with the four worlds are Nephesh, Ruach, Neshama, Chaya; four letters in the name of God; Yud Hey Vav Hey; and four cups of wine at the Passover Seder.

When the Holy One, blessed be He, was about to make the world, all the letters of the Alphabet were still embryonic, and for two thousand years the Holy One, blessed be He, had contemplated them and toyed with them. When He came to create the world, all the letters presented themselves before Him in reversed order. ... Then appeared the letter Dalet as well as the letter Gimel and put forth similar claims. The Lord gave them a similar reply, saying: It should suffice you to remain side by side together, since “the poor will not cease from the land” (Deuteronomy 15:11), who will thus need benevolence. For the Dalet signifies poverty (Dalluth) and the Gimel beneficence (Gemul). Therefore separate not from each other, and let it suffice you that one maintains the other. (Zohar. 1984. Tr. Harry Sperling et al. New York: Soncino. 1:2b - 3a. p. 12).

Dalet presents itself to me as a door in meditation. It is always very interesting to see where I am when I open the door. Sometimes I am by the ocean, sometimes in a garden and sometimes in other places. Let me know where you end up when you meditate with the Dalet.