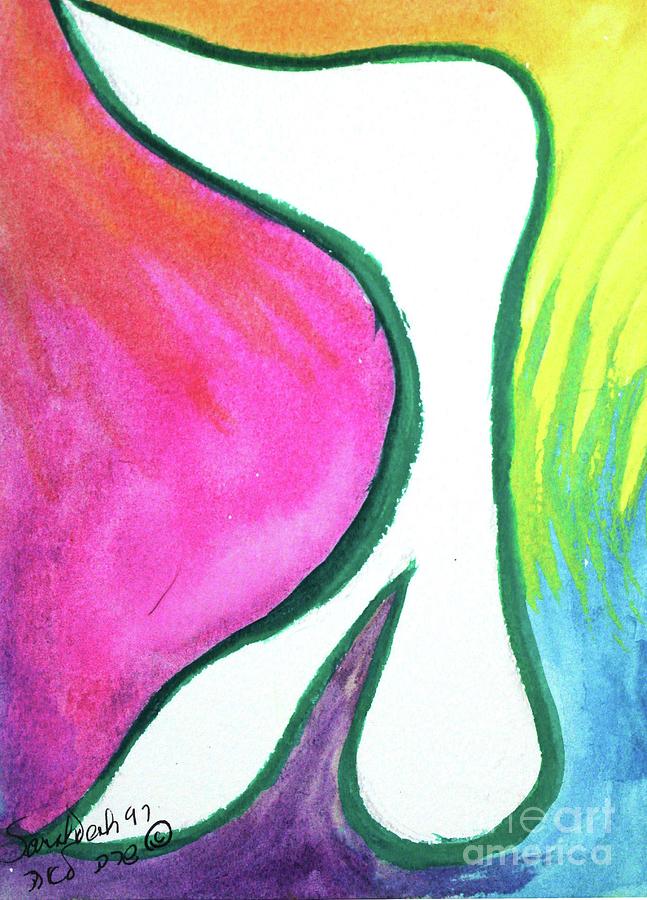 The Hebrew Letter featured in this painting is the Gimel.

GIMEL is the 3rd letter of the Hebrew alphabet, has a numerical value of 3, makes a sound like the G in Give, is constructed of a Vav and a Yud means CAMEL or REWARD and is associated the phrase Gemilut Hasadim - ACTS OF LOVINGKINDNESS.
The The Bahir , which may be the oldest kabbalistic text, is attributed to R ben HaKana, a first century kabbalist. In this text, R. Akiva states, the Gimel has "three parts because it BESTOWS, GROWS AND SUSTAINS." The three parts are the head, the tail, and a pipe in the middle through which energy can pass. "The GIMEL draws from above through its head and disperses through its tail” (The Bahir York Beach: Samuel Weiser. lx, 8).

Talmud -
Gimel Dalet, show kindness to the Poor [Gemol Dallim]. Why is the foot of the Gimel stretched toward the Dalet? Because it is fitting for the benevolent to run after [seek out] the poor. And why is the roof of the Dalet stretched out toward the Gimel? Because he [the poor] must make himself available to him. And why is the face of the Dalet turned away from the Gimel? Because he must give him [help] in secret, lest he be ashamed of him. (Shabbat 104a).
When he [a proselyte] went before Hillel, he accepted him as a proselyte. On the first day, he taught him, Aleph Beit Gimel Dalet [the first four letters of the Hebrew alphabet]; the following day he reversed [them, the letters ] to him. ‘But yesterday you did not teach them to me thus,’ he protested. ‘Must you then not rely upon me [As to what the letters are]? Then rely upon me with respect to the Oral [Torah] too’ (Berachot 31a).
Raba said, There are seven letters which require each three strokes, and these are they: Shin, Ayin, Tet, Nun, Zayin, Gimel, and Tsade.

Gimel is one of 7 letters which may be adorned with TAGIN, or little crowns, in the Torah, Tefillin or Mezzuzah scroll. These are called the SHAYNAYZ GAYTZ letters [Shin, Ayin, Tet, Nun, Zayin, Gimmel, and Tsade] Each one of these letters contains a Zayin. A TAG is composed of 3 strokes which themselves look like little Zayin s.
There is a wonderful story in Talmud, which describes Moses ascending to Heaven to find God occupied in affixing TAGGIN to the letters of Torah:

Rab Judah said in the name of Rab, When Moses ascended on high he found the Holy One, blessed be He, engaged in affixing coronets to the letters. [These are the Taggin, i.e., three small strokes written on top of the letters Shatnayz Gaytz in the form of a crown (Menachoth 29b).

[The writing of the letters] must be kethibah tammah [perfect writing]; thus one must not write the… the Gimel as a Tsade or the Tsade as a Gimel (Shabbat 103b).
Zohar -

When the Holy One, blessed be He, was about to make the world, all the letters of the Alphabet were still embryonic, and for two thousand years the Holy One, blessed be He, had contemplated them and toyed with them. When He came to create the world, all the letters presented themselves before Him in reversed order. ... Then appeared the letter Dalet as well as the letter Gimel and put forth similar claims. The Lord gave them a similar reply, saying: It should suffice you to remain side by side together, since “the poor will not cease from the land” (Deuteronomy 15:11), who will thus need benevolence. For the Dalet signifies poverty (Dalluth) and the Gimel beneficence (Gemul). Therefore separate not from each other, and let it suffice you that one maintains the other. (Zohar. 1984. Tr. Harry Sperling et al. New York: Soncino. 1:2b - 3a. p. 12).