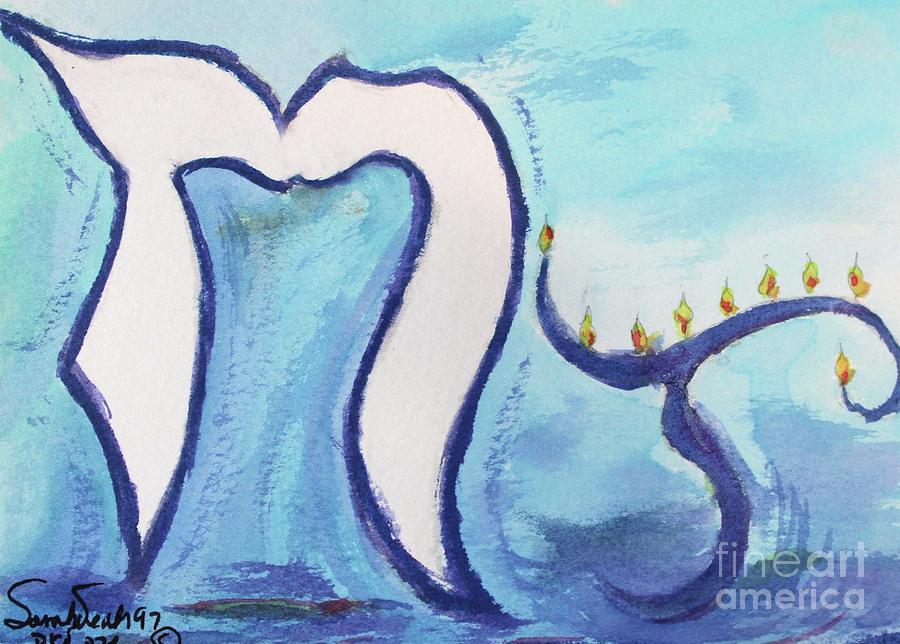 From the teachings of Mitchell Chefitz, author The Seventh Telling , The Thiry-third Hour, The Curse of Blessings, White Fire and Blood Covenant:
The Rabbis do everything they can to spiritualize what had been the military victory of the zealot Maccabees. So, we might do so also. Each day of Hannukah, as a candle is lit, we might meditate on casting a little more light into the world.

Legends have been interwoven with historical fact to create what we now know as HANUKKAH. The historical facts are described in (1 Maccabees 4:36-59, in which Judah Maccabee defeats the Greco-Syrian army in 165 BCE. While Judea was under Hellenistic rule, pagan worship took place in the Temple. After the Maccabean victory, Judah found enough undefiled oil in the Temple to rekindle the menorah. However, there was only enough oil to last one day. Miraculously, it burned for 8 days.

The Hebrew Letter featured in this painting is the Chet.. Taken together, they spell HANNUKAH.

CHET is the 8th letter of the alphabet and has a numerical value of 8, is pronounced like the CH in BaCH. Kushner's description is the best that I have found of what is necessary to create the sound of Chet . It is the "top of your throat and the bottom of your throat fighting against one another” (Kushner, Lawrence. 1990. The Book of Letters: Sefer Otiyot.Woodstock: Jewish Lights Publishing. 39).