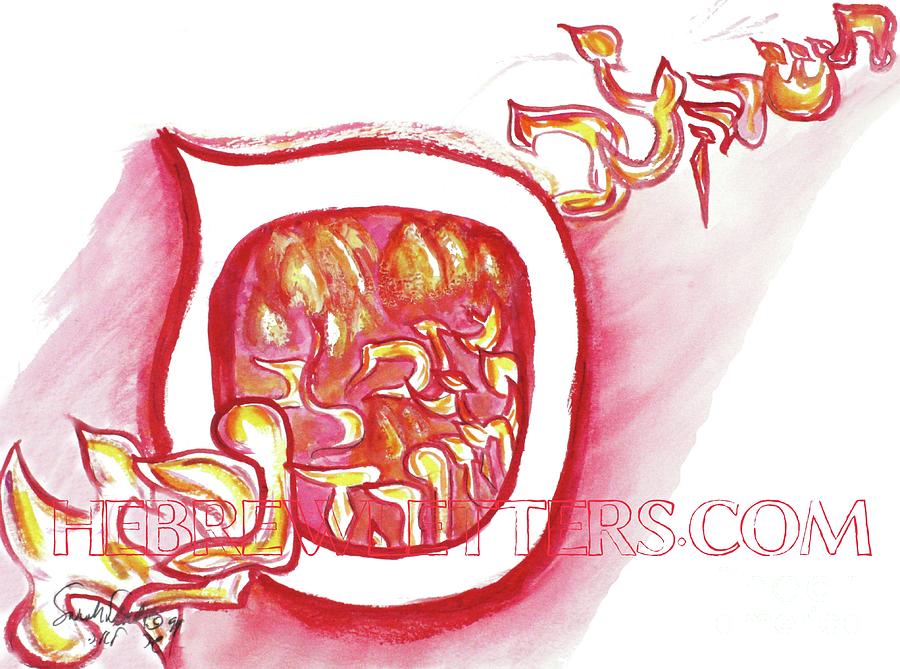 In this painting ALL 22 of the Hebrew letters are represented, but the letter featured is the Samech.

SAMECH is the 15th letter of the Hebrew alphabet, has a numerical value of 60, makes a sound like the S in Sun, is shaped like a circle and means SUPPORT, TO TRUST, TO RELY ON.

Tradition tells us that the engraving of the letters of the 10 commandments went all the way through the tablets – from the front side to the back side. Therefore the Samech, since it is completely closed, should have fallen out. Because it did not, R. Hisda said that it stood there be means of a miracle (Shabbat 104a).

It must be ‘kethibah tamma’h [perfect writing]; the Mem as a Samech or the Mem as a Mem, closed [letters] open or open letters closed (Shabbat 103b).

[In the alphabet the letter Samech is followed by the Ayin]. Samech Ayin [means] support [Semach] the poor [aniyim] (Shabbat 104a).

Meditating with the Samech has been an interesting experience for me. I had the notion that the Samech would roll around and generally have a good time. I had been repeatedly surprised to find that the Samech, for me, is very calm. My Samech definitely does not roll around , at least not yet. But it does lie down and I am able to sit in it as though it were an inner tube and float on the ocean. It also becomes a swing and we sway back and forth. Let me know of your experience with the Samech.

In this painting ALL 22 of the Hebrew letters are represented. The Rabbis of the Talmud regarded the letters as the basic elements of the universe, much as we think of oxygen, nitrogen, hydrogen and carbon (From the teachings of Rabbi Mitchell Chefitz, author The Seventh Telling , The Thiry-third Hour, The Curse of Blessings and White Fire.

The word Etconsists of the letters aleph and tav, which include between them all the letters, as being the first and last of the alphabet (Zohar. 1984. Tr. Harry Sperling et al. New York: Soncino. 1:15b). The story of The story of Et:

Rabbi Dov Ber, the ‘Maggid of Mezritch,’ and a follower of the Baal Shem Tov, explains in Or Torah, the secret of the verse ‘Bereshit Bara Eloheim Et’ - IN A BEGINNING GOD CREATED ET. These are the first words of Torah - Genesis 1:1 - in a beginning God created the heavens and the earth. ET is a word that is not translatable into English. It is like a marker that says - "a definite direct object is next." Thus there needs to be an ET before THE heavens and THE earth. If there was no’ the,’ there would not need to be an ET. But Dov Ber points out a deeper meaning. ET is spelled - Aleph Tav. Aleph Tav is an abbreviation for the ALPHA-BET. Aleph is the first letter of the ALPHABET and Tav the last. So in a beginning God created the ALPHA-BET. And God did this before creating the heavens and the earth. God used the letters, the building blocks, to create the world.

R. Shneur Zalman of Liadi, the Alter Rebbe of Chabad explains that if the letters were to depart even for an instant, all of creation would become absolute nothingness (Zalman, Shneur. 1981. "Igeret Hateshuvah. Shaar Hayichud.” Tanya. Brooklyn: Kihot. 289).

Some of you may read these words and laugh. Silly stories. But I challenge you to spend 5 minutes a
day thinking about the letters. Perhaps you could practice drawing one letter for about a minute and
then think about it of 4 minutes. See if you can do this every day for a few weeks. And watch what happens.
They letters are ALIVE.