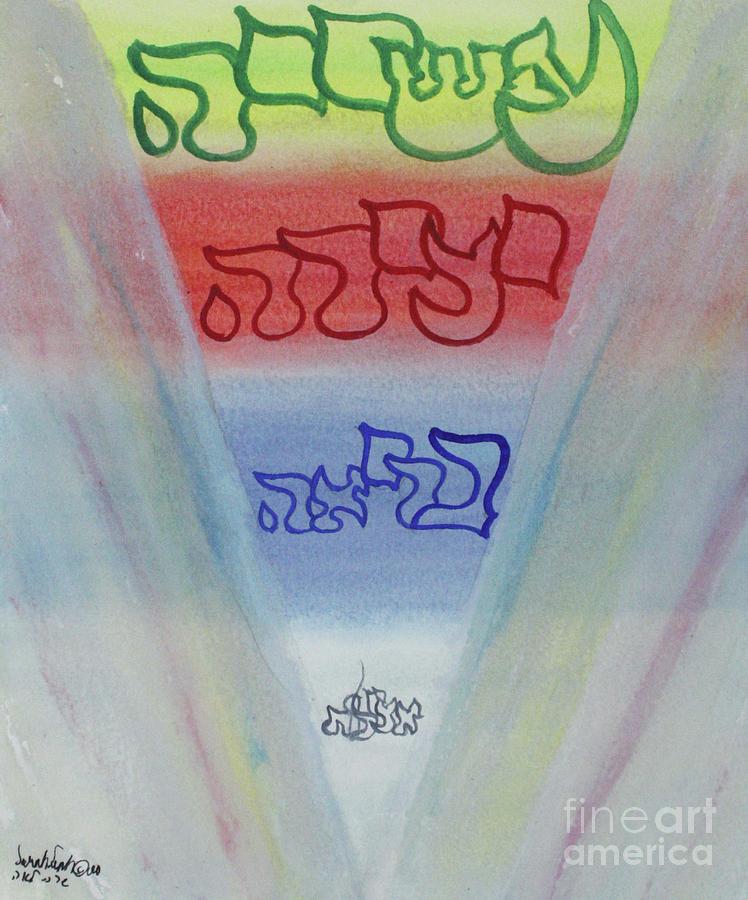 The Four Worlds Of Kabbalah

The Four Worlds Of Kabbalah


THE FOUR WORLDS OF KABBALAH

The following teachings are taken from the teachings of Mitchell Chefitz, author The Seventh Telling, The Thiry-third Hour, The Curse of Blessings, White Fire and Blood Covenant::

There is a technique of learning Torah through the Four Worlds that brings one into the very presence of God.
Consider this. If the Torah emanates from God, if it is the word of God, then it may be possible to follow that word back to its source. The road map is the word itself. PaRaDiSe. P-R-D-S. ‘P’shat, Remez, Drash, Sod.’ Studying Torah in such a fashion leads to paradise. Some say that studying the Torah in this fashion is paradise.

The Red Sea story in the ‘’ World of Action, Asiyah’. The children of Israel have been enslaved for centuries. Moses comes along and tells Pharaoh to let the people go. Pharaoh refuses. There are ten plagues. Moses and the children of Israel head for the sea. Pharaoh’s armies chase after them. They are pinned against the sea. A pillar of cloud separates the two camps by day, a pillar of fire by night. An east wind blows all night. Maybe it’s a low tide. The Israelites are traveling light. They get through the sea. The Egyptians are following in chariots. The wheels get bogged down. The wind stops blowing. The sea rises. The Egyptians are drowned. The children of Israel emerge safely on the other side. ‘P’shat.’ [P’SHAT (Pey Shin Tet ) is from the Hebrew, meaning PLAIN MEANING (Alcalay, R. The Complete Hebrew English Dictionary Jerusalem: Massada. 2131)].


The Red Sea story in the ‘ World of Formation, Yetzirah.’ The children of Israel are trapped in the tightest of places. The Hebrew for Egypt, ‘mitzrayim’, means a very tight place. Taskmasters are set over them. Moses comes before Pharaoh and takes a stick and inserts it into the river Nile. Blood issues forth. There is a first plague, and at the end of each month another, so that the tenth plague brings nine months to full term. The waters of the Red Sea break. The children come forth out of the tight place. And the taskmasters, who had held the children captive within the tight place all that time, come forth after them, and perish. So the birth of the children of Israel, and the crossing of the Red Sea in the World of Formation. We use a metaphor of childbirth. It’s as if we had insemination, pregnancy, labor, breaking of the waters, emergence of the new born, the death of the placenta. ‘Remez.’ [REMEZ is from the Hebrew, meaning HINT, SIGNAL (Kolatch, Alfred J. 1984 The Complete Dictionary of English and Hebrew First Names Middle Village: Jonathan David. 195).

The Red Sea story in the ‘World of Creation, Briyah’. There is no creation without an issuing forth. The very creation described in the first chapter of Genesis is an issuing forth. God says, ‘Let there be light,’ and there was light. God separates the light from the darkness. God creates the waters, and separates the waters so that the dry land appears. This is the process of creation in Genesis. And here in the book of Exodus? The creation of the people of Israel is described in the same terms. Light and darkness, the pillar of fire and the pillar of cloud. The sea, the splitting of the sea, the appearance of dry land. The children of Israel are created in the exodus out of Egypt. There is no creation without an exodus.

An artist knows that ass long as he/she is working on a painting, or sculpting a piece of stone, it is attached to the artist. It is not a creation until it goes into exile from him/her, until it is separated from him/her. When it stands apart from him/her, it is a creation. When it is attached to him/her, it is only a part of him/her.
So the children of Israel are separated from Egypt and become a people. The world is separated from God and becomes a creation. So we have the framework for beginning to understand the passage through the Red Sea in terms of the World of Creation. ‘’Drash.’ [DRASH [Dalet Resh Shin] is from the Hebrew, meaning HOMILECTICAL INTERPRETATION, EXPOSITION, EXEGESIS CREATION (Alcalay, R. The Complete Hebrew English Dictionary. .Jerusalem: Massada. 471)].

Now, the ‘World of Emanation, Atzilut.’ If the first reading of the Red Sea told us what was happening, and the second what it feels like, and the third the model of creation to learn from it, wouldn’t it be nice if the fourth reading would bring us into the presence of the Creator itself?

“In the 14th chapter of Exodus, verses 19, 20 and 21 each have seventy-two letters. Seventy-two letters is an especially long verse. To have three such verses together is out of the ordinary. Not only that, the three verses are the most numinous, God-active verses in the entire story. They describe how the angel of God illuminates the night to make a barrier between the camps of the Egyptians and the Israelites, and then, the very splitting of the sea.
“In these three seventy-two letter verses the rabbis find the seventy-two letter name of God. If you have done your math, you know that seventy-two is four times eighteen, eighteen being the numerical value of the word for life in Hebrew. Life, if you like, extended through the four worlds. In the deepest Kabbalah, these three verses become a meditation, a doorway to the ‘World of Emanation. ‘Sod.’ [SOD is from the Hebrew, meaning SECRET (Alcalay, R. The Complete Hebrew English Dictionary.Jerusalem: Massada.1735)].

The Rabbis of the Talmud regarded the letters as the basic elements of the universe, much as we think of oxygen, nitrogen, hydrogen and carbon (From the teachings of Mitchell Chefitz, author The Seventh Telling. , The Thiry-third Hour, The Curse of Blessings, White Fire and Blood Covenant).

The word ‘Et’ consists of the letters ALEPH and TAV, which include between them all the letters, as being the first and last of the alphabet (Zohar. 1984. Tr. Harry Sperling et al. New York: Soncino. 11:15b).
Rabbi Dov Ber, the ‘Maggid of Mezritch,’ and a follower of the Baal Shem Tov, explains in Or Torah, the secret of the verse ‘Bereshit Bara Eloheim Et’ - IN A BEGINNING GOD CREATED ET. These are the first words of Torah - Genesis 1:1 - in a beginning God created the heavens and the earth. ET is a word that is not translatable into English. It is like a marker that says - "a definite direct object is next." Thus there needs to be an ET before THE heavens and THE earth. If there was no ‘the’, there would not need to be an ET. But Dov Ber points out a deeper meaning. ET is spelled - Aleph Tav. Aleph Tav is an abbreviation for the ALPHA-BET. Aleph is the first letter of the ALPHABET and Tav the last. So in a beginning God created the ALPHA-BET. And God did this before creating the heavens and the earth. God used the letters, the building blocks, to create the world.

R. Shneur Zalman of Liadi, the Alter Rebbe of Chabad explains that if the letters were to depart even for an instant, all of creation would become absolute nothingness (Zalman, Shneur. 1981. "Igeret Hateshuvah. Shaar Hayichud.” Tanya. Brooklyn: Kihot. 289).

Some of you may read these words and laugh. Silly stories. But I challenge you to spend 5 minutes a day thinking about the letters. Perhaps you could practice drawing one letter for about a minute and think about it of 4 minutes. See if you can do this every day for a few weeks. And watch what happens. They letters are ALIVE!!!!