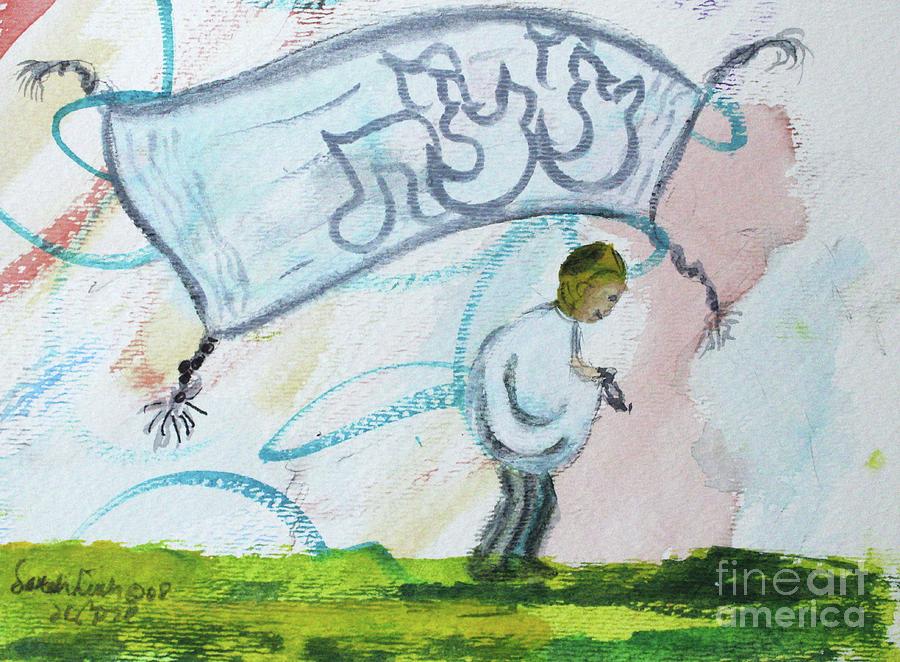 Hebrew Bible source s - ‘Speak to the Israelites and say to them: 'Throughout the generations to come you are to make tassels on the corners of your garments, with a blue cord on each tassel [Tzitziit]. You will have these tassels [Tzitziit] to look at and so you will remember all the commands of the Lord (Numbers 15:38-15:39).
‘Make tassels [Tzitziit] on the four corners of the cloak you wear. (Deuteronomy 22:12).

Talmud - Raba also said, You can infer from this that the upper knot is an ordinance of the Torah; for should you say it is a Rabbinic ordinance, then why was it necessary for the Torah to permit the insertion of [woollen] fringes in a [linen] garment? One would have no doubt about it, for if one merely fastens together [two pieces] with one fastening no connection is thereby formed! You can therefore infer from this that it is an ordinance of the Torah (Menachot 38b).

The Hebrew Letters featured in this painting are Tsade Yud Tsade Yud Tav. Taken together, and reading from right to left, they spell TZITZIT.

TSADE is the 18th letter, sounds like T and S pronounced at the same time, is constructed of 2 letters - an elongated and curved or bent Nun on the left and a Yud on the right. Tsade is associated with the word TSEDEK, RIGHTEOUS (Kaplan, Aryeh. 1979. Tr. The Bahir. York Beach: Samuel Weiser. 22).

He [God] made the letter Tsade king over taste and he bound a crown to it…
And then He formed
Aquraius in the Universe
Shevat in the Year
And the Korkeban [gizzard] in the Soul male and female
Kaplan, Aryeh. 1990. Sefer Yetzirah. The Book of Creation. York Beach: Samuel Weiser. 217).

Tsade is one of 7 letters which may be adorned with TAGIN, or little crowns, in the Torah, Tefillin or Mezzuzah scroll. These are called the SHAYNAYZ GAYTZ letters [Shin, Ayin, Tet, Nun, Zayin, Gimmel, and Tsade] Each one of these letters contains a Zayin. A TAG is composed of 3 strokes which themselves look like little Zayins.
There is a wonderful story in Talmud, which describes Moses ascending to Heaven to find God occupied in affixing TAGGIN to the letters of Torah: Rab Judah said in the name of Rab, When Moses ascended on high he found the Holy One, blessed be He, engaged in affixing coronets to the letters. [These are the Taggin, i.e., three small strokes written on top of the letters ‘Shatnayz Gaytz’ in the form of a crown (Menachoth 29b).

I am the sign of the righteous (Zadikim) and of Thyself who art called righteous, as it is written, “For the Lord is righteous, he loves righteousness” (Psalms 11:7; Zohar. 1984. Tr. Harry Sperling et al. New York: Soncino. 1:2b).

Tsade is one of 5 letters: [Caf Mem Nun Pey Tsade] that have 2 forms - the regular [bent] form used in the beginning and middle of a word and the FINAL FORM,- SOFIT, used as the last letter of a word (Shabbat 4a).

[The writing of the letters] must be ‘kethibah tammah’ [perfect writing]; thus one must not write the… the Gimel as a Tsade or the Tsade as a Gimel (Shabbat 103b).

There are many ways to meditate in the Tsade. The Tsade gives great hugs. One can sit in the curve on the bottom and rock back and forth. But if one stands where the Nun and the Yud meet, the Tsade will grip one securely at the waist with the tops of the Nun and the Yud; and one can see forever.

YUD is the 10th letter of the Hebrew alphabet, has a numerical value of 10, means HAND, makes a sound like the Y in Year and is a simple point. It is the smallest letter in the alphabet and yet is frequently associated with the very large concept of EMANATION, the highest level in the Four World paradigm of Kabbalah.

If you enter meditation and the Yud comes to you, ask Yud a question and wait for the answer. Amazing results. The
Yud is also capable of taking you anywhere in the Universe. Give it a try and let me know the results.

TAV is the 22nd letter in Hebrew alphabet - the last letter. It has a numerical value of 400, means MARK, SIGN. In 1500 B.C.E. the Tav was written as an X. Perhaps this contributed to its meaning. Tav makes a sound like the T in Tall. The Tav is composed of a Dalet and a Nun.

He [God] made the letter Tav king over Grace and he bound a crown to it…
And then He formed
Jupiter in the Universe
The Sabbath in the Year
And the mouth in the Soul male and female
Kaplan, Aryeh. 1990. Sefer Yetzirah. The Book of Creation. York Beach: Samuel Weiser. 176).

“The [Hebrew] letter Tav advanced in front and pleaded: May it please Thee, O Lord of the world, to place me first in the creation of the world, seeing that I am the concluding letter of Emet (Truth) which is engraved upon Thy seal, and seeing that Thou art called by this very name of Emet, it is most appropriate for the King to begin with the final letter of Emet and to create with me the world. The Holy One, blessed be He, said to her: Thou art worthy and deserving, but it is not proper that I begin with thee the creation of the world, since thou art destined to serve as a mark on the foreheads of the faithful ones (Ezekiel 9:4) who have kept the Law from Aleph Tav, and through the absence of this mark the rest will be killed; and, further, you form the conclusion of MaWeTh (death). Hence thou art not meet to initiate the creation of the world” (Zohar 1984. Tr. Harry Sperling et al. New York: Soncino 1984. Tr. Harry Sperling et al. New York: Soncino. 1:2b).