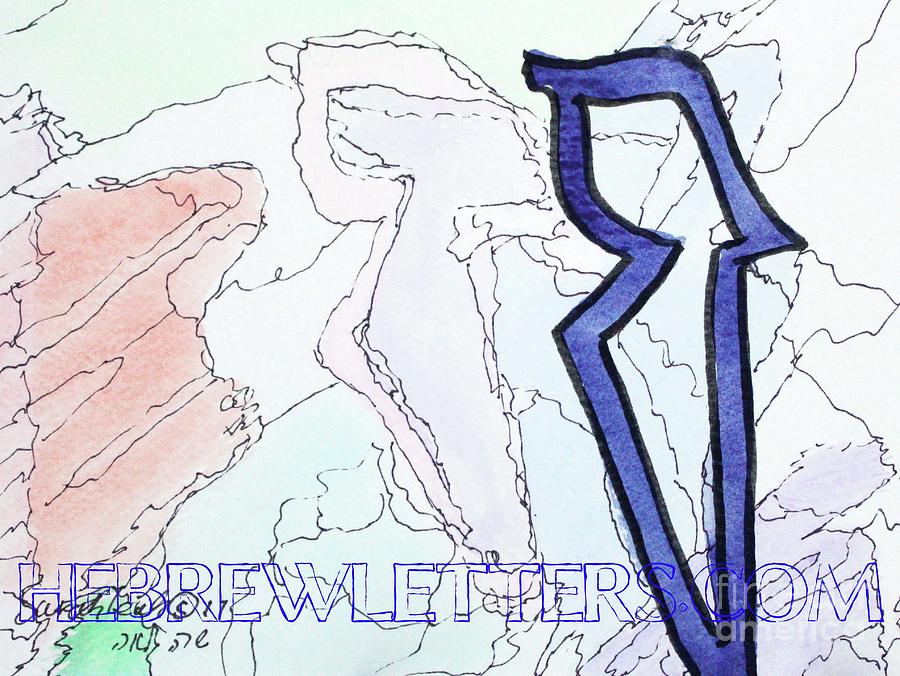 The Hebrew letter featured in this painting is the ZAYIN. These three Zayins are pictured here to resemble taggin. See below for the story.

ZAYIN is the 7th letter of the alphabet, has a numerical value of 7, looks like a sword or a scepter, makes a sound like the Z in Zebra and means SWORD, TO ORNAMENT, TO SUSTAIN.

What is the purpose of the HEY? It is the throne for the ZAYIN. It is thus written in Ecclesiastes 5:7, “For one above the other watches “(Kaplan, Aryeh. 1979. Tr. The Bahir. York Beach: Samuel Weiser. 19).

Zayin is one of 7 letters which may be adorned with TAGIN, or little crowns, in the Torah, Tefillin or Mezzuzah scroll. These are called the SHAYATNAYZ GAYTZ letters [Shin, Ayin, Tet, Nun, Zayin, Gimmel, and Tsade] Each one of these letters contains a Zayin. A TAG is composed of 3 strokes which themselves look like little Zayins.
There is a wonderful story in Talmud, which describes Moses ascending to Heaven to find God occupied in affixing TAGGIN to the letters of Torah:
Rab Judah said in the name of Rab, When Moses ascended on high he found the Holy One, blessed be He, engaged in affixing coronets to the letters. [These are the Taggin, i.e., three small strokes written on top of the letters Shayatnayz Gaytz in the form of a crown (Menachoth 29b).

If you ask in meditation the Zayins will come and encircle you, and you will feel safe. They can also be used to keep out extraneous thoughts during this time.