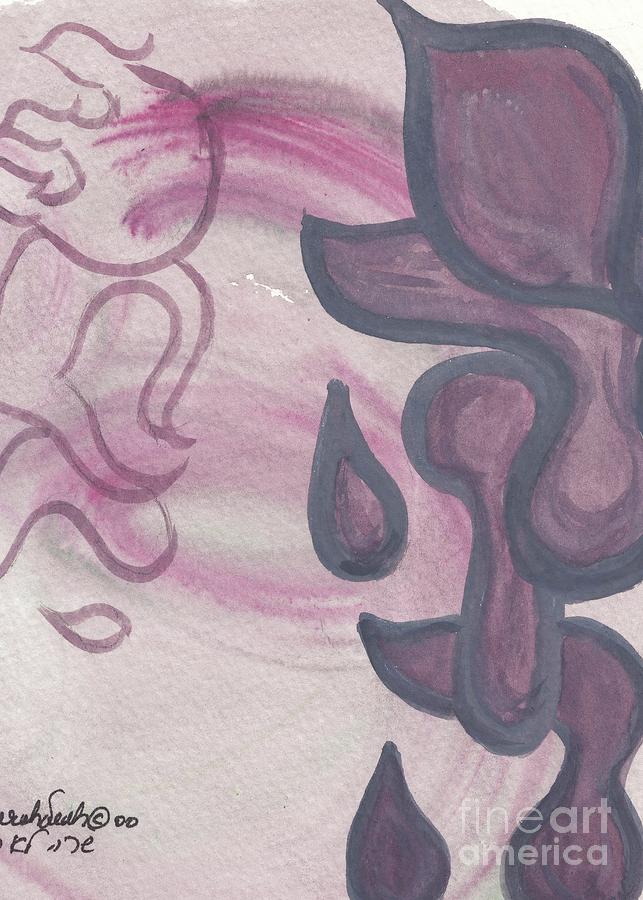 The Hebrew Letters featured in this painting are Yud Hey Vav Hey - Shin Mem Hey. Taken together, and reading from right to left, they spell ADONAI SHAMA.

If you enter meditation and the Yud comes to you, ask Yud a question and wait for the answer. Amazing results. The
Yud is also capable of taking you any where in the Universe. Give it a try and let me know the results.


HEY is the 5th letter of the Hebrew alphabet and has a numerical value of 5, means BEHOLD and is constructed of a Dalet and a Yud, makes a sound like the H in Happy. Hey appears twice in the Yud Hey Vav Hey Name of God.

VAV is the 6th letter, has a numerical value of 6, is constructed of a single vertical line, means HOOK and makes a sound like the V in Victory. When used as a vowel, Vav can sound like a long `o’ or a long `u.’ Translated it means AND. It is the GREAT CONNECTOR. Vav appears in the Four Letter name of God - Yud Hey Vav Hey.
“VAV is the sound if beiing joined. And VAV is a the sound of and. One and another” (Kushner, Lawrence. 1990. The Book of Letters: Sefer Otiyot.Woodstock: Jewish Lights Publishing. 35).

What does the letter VAV resemble? It is alluded to in the verse “He spreads out light like a garment” (Psalms 104:5). For VAV is nothing other than six directions [ east, west, north south, up and down]? (Kaplan, Aryeh. 1979. Tr. The Bahir. York Beach: Samuel Weiser. 30).

The first word in Torah is Bereshit which t means IN A BEGINNING. If you divide Bereshit into bara and sheet it means HE CREATED SIX [sheet is 6 in Aramaic] Six what? The 6 days in which creation was completed? (Zohar . 1984 Tr. Harry Sperling et al. New York: Soncino. 1:3b. 13).

When used as a vowel, Vav can sound like a long `o’ or a long `u.’ Translated it means AND. It is the GREAT CONNECTOR. Vav appears in the Four Letter name of God - Yud Hey Vav Hey
“VAV is the sound if beiing joined. And VAV is a the sound of and. One and another” (Kushner, Lawrence. 1990. The Book of Letters: Sefer Otiyot.Woodstock: Jewish Lights Publishing. 35).

In meditation, the Vav is a place where you can leave your body in order to descend to a deeper place.

Tradition tells us that the engraving of the letters of the 10 commandments went all the way through the tablets, from the front side to the back side. Therefore the final Mem since it is completely closed, should have fallen out. . Because it did not, R. Hisda said that it stood there be means of a miracle (Shabbat 104a).

The Mem is one of the 5 letters [Caf Mem Nun Pey Tsade] that have 2 forms - the regular [bent] form used in the beginning and middle of a word and the FINAL FORM, ‘Sofit’, used as the last letter of a word (Shabbat 4a).
One form is used in the beginning and the middle of a word - the open Mem. The other form is at the end of the word - the closed Mem. According to Talmud, the open Mem represents revealed teaching and the closed Mem represents concealed teaching (Shabbat 104a).

It must be ‘kethibah tammah’ [perfect writing]; the Mem as a Samech or the Mem as a Mem, closed [letters] open or open letters closed (Shabbat 103b).

Sometimes when I meditate with this letter, the Mem acts like sort of a submarine for me. At other times I can breathe under water. Nice. Let me know how you do.