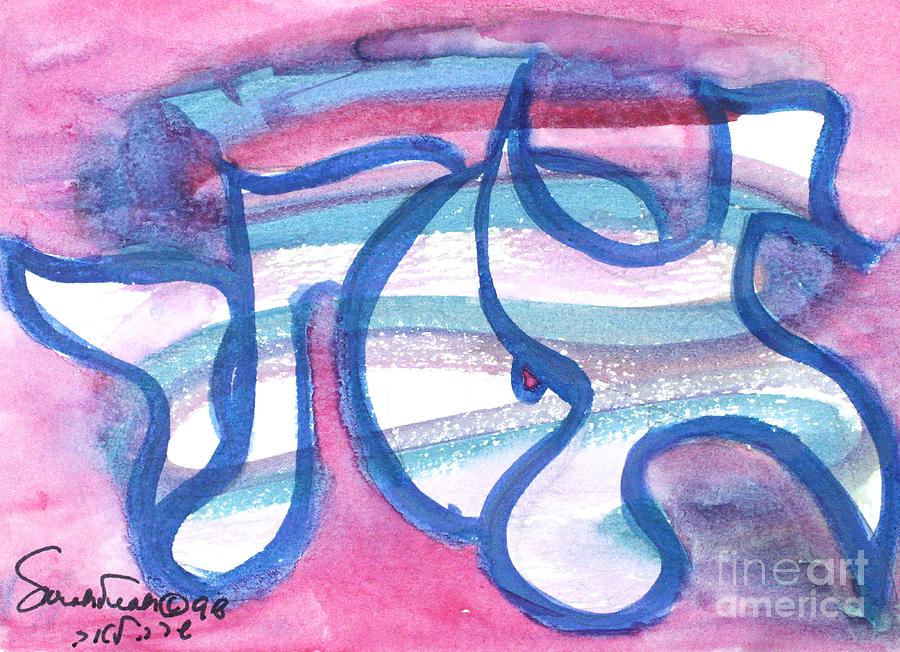 Original - Not For Sale

This piece is not for sale.   Please feel free to contact the artist directly regarding this or other pieces.

Hebrew Bible name – Esther was the Jewish queen of King Ahasuerus of Persia who save her people from the wicked plans of Haman (Esther 8:1-8).

Talmud -
Seven prophetess. Who were these? Sarah, Miriam, Deborah, Hannah, Abigail, Huldah and Esther. Sarah, as it is written, the father of Milka the father of Yisca [Genesis 11:29] and R. Isaac said [on this]: Yisca is Sarah; and why was she called Yisca? Because she discerned [sakethah] by means of the holy spirit, as it is said, In all that Sarah, saith unto thee, hearken to her voice. [Genesis 21:12]. Another explanation is: because all gazed [sakin] at her beauty. Miriam, as it is written, And Miriam the prophetess the sister of Aaron (Megillah 14a).

The Hebrew Letters featured in this painting are Aleph Samech Tav Resh. Taken together, and reading from right to left, they spell ESTER.

Each of the 22 letters of the Hebrew alphabet has a special meaning and a story to tell.
Here a few brief ones about the letters on this painting.

The Holy One, blessed be He [haKadosh barochu, said: I am not called as I am written: I am written with Yud Hey Aleph Dalet [Adonai] (Kiddushin 71a Talmud. 1990. London: Soncino).

The Hebrew letters of the word for husband are Aleph Yud Shin, and for wife, Aleph Shin Hey.
The Yud and Hey form the Divine Name; but if omitted, only Aleph and Shin are left which form the word Esh, fire (Sotah 17a Talmud. 1990. London: Soncino).

Zohar -
The letter Aleph remained in her place without presenting herself. Said the Holy One, blessed be His name: Aleph Aleph, wherefore comest you not before Me like the rest of the letters? She answered: Because I saw all the other letters leaving Thy presence without any success. What, then, could I achieve there? And further, since Thou have already bestowed on the letter Beit this great gift, it is not meet for the Supreme King to take away the gift which He has made to His servant and give it to another. The Lord said to her: Aleph Aleph, although I will begin the creation of the world with the Beit, thou wilt remain the first of the letters. My unity shall not be expressed except through you, on you shall be based all calculations and operations of the world, and unity shall not be expressed save by the letter Aleph. Then the Holy One, blessed be His name, made higher-world letters of a large pattern and lower-world letters of a small pattern. It is therefore that we have here two words beginning with Beit [Bereshith bara] and then two words beginning Aleph Elohim et). They represent the higher-world letters and the lower-world letters, which two operate, above and below, together and as one (Zohar . 1984 Tr. Harry Sperling et al. http://amzn.to/2wAelJf New York: Soncino.
1:3a-1:3b p.12-13).

When one is meditating with the Aleph be prepared for hugs. The Aleph loves to give hugs and receive them.


SAMECH is the 15th letter of the Hebrew alphabet, has a numerical value of 60, makes a sound like the S in Sun, is shaped like a circle and means SUPPORT, TO TRUST, TO RELY ON.

God made the Samech king over sleep
God formed Sagittarius in the Universe
Kislev in the year
And Kivah in the Soul
(Kushner, Lawrence. 1990. The Book of Letters: Sefer Otiyot. Woodstock: Jewish Lights Publishing. 217).

Tradition tells us that the engraving of the letters of the 10 commandments went all the way through the tablets – from the front side to the back side. Therefore the Samech, since it is completely closed, should have fallen out. Because it did not, R. Hisda said that it stood there be means of a miracle (Shabbat 104a).

‘U-kethabtam:’ It must be ‘kethibah tammah’ [perfect writing]; thus one must not write the Mem as a Samech or the Samech as a Mem, closed [letters] open or open letters closed (Shabbat 103b).

[In the alphabet the letter Samech is followed by the Ayin]. Samech Ayin [means] support [Semach] the poor [aniyim] (Shabbat 104a).

Meditating with the Samech has been an interesting experience for me. I had the notion that the Samech would roll around and generally have a good time. I had been repeatedly surprised to find that the Samech, for me, is very calm. My Samech definitely does not roll around, at least not yet. But it does lie down and I am able to sit in it as though it were an inner tube and float on the ocean. It also becomes a swing and we sway back and forth. Let me know of your experience with the Samech.

Tav is the 22nd letter in Hebrew alphabet the last letter, has a numerical value of 400, makes a sound like the T in Tall, is composed of a Dalet and a Nun means MARK, SIGN. In 1500 B.C.E. the Tav was written as an X. Perhaps this contributed to its meaning.

According to Sefer Yetzirah, God created the world by means of these [Hebrew] letters. And God “made the letter Tav king over Grace and He bound a crown to it and combined one with another and with them He formed Jupiter in the Universe, Shabbat in the Year and the mouth in the Soul, male and female” Sefer Yetzirah. The Book of Creation. Tr. Aryeh Kaplan. 1990.York Beach: Samuel Weiser. 5, 95, 145, 147, 159, 176).

“The [Hebrew] letter Tav advanced in front and pleaded: May it please Thee, O Lord of the world, to place me first in the creation of the world, seeing that I am the concluding letter of Emet (Truth) which is engraved upon Thy seal, and seeing that Thou art called by this very name of Emet, it is most appropriate for the King to begin with the final letter of Emet and to create with me the world. The Holy One, blessed be He, said to her: Thou art worthy and deserving, but it is not proper that I begin with thee the creation of the world, since thou art destined to serve as a mark on the foreheads of the faithful ones (Ezekiel 9:4) who have kept the Law from Aleph Tav, and through the absence of this mark the rest will be killed; and, further, you form the conclusion of MaWeTh (death). Hence thou art not meet to initiate the creation of the world” (Zohar 1984. Tr. Harry Sperling et al. New York: Soncino 1984. Tr. Harry Sperling et al. New York: Soncino. 1:2b).

God said to the Angel Gabriel: ‘Go set a Tav [MARK] on the foreheads of the righteous so that they will be protected’ (Shabbat 55a).

The Hebrew letters of EMET [Aleph Mem Tav] are located far apart in the alphabet, 1st, 13th and 22nd respectively, because TRUTH in found infrequently, at elongated intervals (Shabbat 104a).

They used to write a Tav for Teruma! [OFFERING, GIFT, DONATION, CONTRIBUTION] (Yevamoth 115b).

‘But not to one who is wholly righteous? Is it not written, And begin [the slaughter] with my sanctuary, (Ezekiel 9:6) which, R. Joseph learned, should not be read my sanctuary but my sanctified ones, namely the men who fulfilled the Torah from Aleph to Tav’? (Avodah Zarah 4a).

Tav is the sixth letter of the first word, Bereshit, in the Bible.

What does it mean to be marked by a Tav? Is there really an angel Gabriel? Or even an angel? Why did God form Shabbat with the Tav? Why did God make the Tav king over Grace? Grace? These can be topics for meditation.

Resh is the 20th letter of the Hebrew alphabet, has a numerical value of 200, makes a sound like the R in Radiant and means BEGINNING or HEAD. When one spells out the letter Resh in Hebrew, it is Resh Yud Shin. Yud and Shin spell Yesh - THERE IS. The letter Resh means BEGINNING. So it is possible to say that the Resh literally means THERE IS A BEGINNING.

The Resh looks very much like the Dalet. The only difference is that the right angle of the Resh is a rounded 45-degree angle. The horizontal line of the Dalet has a little foot that extends backwards toward the Gimel. Talmud cautions us not to mistakenly write the Dalet as a Resh or the Resh as a Dalet (Shabbat 103b The Soncino Hebrew - English Talmud. 1990. http://amzn.to/2wBfsIT London: Soncino).

“Kuf [stands for] Kadosh [holy]; Resh [for] Rasha [wicked]: why is the face of the Kuf averted from, the Resh? The Holy One, blessed be He, said: I cannot look at the wicked. And why is the crown of the Kuf turned toward the Resh? The Holy One, blessed be He, saith: If he repents, I will bind a crown on him like Mine. And why is the foot of the Kuf suspended? [To show] that if he repents, he can enter and be brought in [to God's favor] through this [opening]. This supports Resh Lakish, for Resh Lakish, said: What is meant by, Surely he scorns the scorners, But he giveth grace unto the lowly If one comes to defile himself, he is given an opening; if one comes to cleanse himself, he is helped” (Shabbat 104a The Soncino Hebrew - English Talmud. 1990. http://amzn.to/2wBfsIT London: Soncino).).