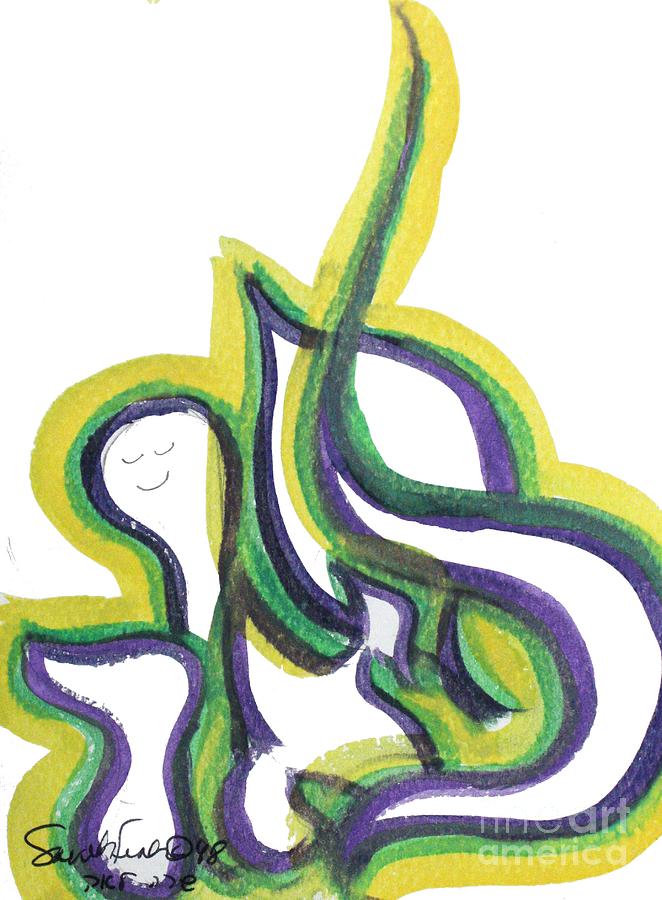 
The Hebrew Letters featured in this painting are Lamed Yud - Aleph Vav Resh. Taken together, and reading from right to left, they spell LIOR.


Lamed is the 12th letter of the Hebrew alphabet, has a numerical value of 30, makes a sound like the L in Like, Lamed means both TO LEARN and TO TEACH.
The Lamed is the tallest and most majestic of all the letters. Indeed Rashi interprets A TOWER FLYING IN THE AIR (Hagigah 15b) - as applying to the upper stroke of the Lamed. The Lamed is generally considered to be constructed of a Caf (20) with a Vav (6). In this configuration the LAMED has a GEMATRIA of 26 - the same as that of the Yud (10) Hey(5) Vav (6) Hey (5) name of God (Haralick, Robert M. 1995. The Inner Meaning of the Hebrew Letters. Northvale: Jason Aronson. 180)
Since LAMED means LEARNING, it would seem that this would constitute a direct connection between LAMED, LEARNING and GOD.

If you enter meditation and the Yud comes to you, ask Yud a question and wait for the answer. Amazing results. The
Yud is also capable of taking you any where in the Universe. Give it a try and let me know the results.


ALEPH is the first letter of the Hebrew alphabet and has a numerical value of one, meanings are: THOUSAND, MASTER, TEACHING, OX and the Aleph makes no sound.

Talmud -
Aleph Beit [means] learn wisdom [Aleph Binah]. Aleph, learn and Binah, wisdom (Shabbat 104a)
The Holy One, blessed be He [haKadosh barochu, said: I am not called as I am written: I am written with Yud Hey Aleph Dalet [Adonai] (Kiddushin 71a).

The Hebrew letters of the word for husband are Aleph Yud Shin, and for wife, Aleph Shin Hey.
The Yud and Hey form the Divine Name; but if omitted, only Aleph and Shin are left which form the word Esh, fire (Sotah 17a).

Zohar -
The letter Aleph remained in her place without presenting herself. Said the Holy One, blessed be His name: Aleph Aleph, wherefore comest you not before Me like the rest of the letters? She answered: Because I saw all the other letters leaving Thy presence without any success. What, then, could I achieve there? And further, since Thou have already bestowed on the letter Beit this great gift, it is not meet for the Supreme King to take away the gift which He has made to His servant and give it to another. The Lord said to her: Aleph Aleph, although I will begin the creation of the world with the Beit, thou wilt remain the first of the letters. My unity shall not be expressed except through you, on you shall be based all calculations and operations of the world, and unity shall not be expressed save by the letter Aleph. Then the Holy One, blessed be His name, made higher-world letters of a large pattern and lower-world letters of a small pattern. It is therefore that we have here two words beginning with Beit [Bereshith bara] and then two words beginning Aleph Elohim et). They represent the higher-world letters and the lower-world letters, which two operate, above and below, together and as one (Zohar 1984. Tr. Harry Sperling et al. New York: Soncino. 1:3a-1:3b p.12-13).

When one is meditating with the Aleph be prepared for hugs. The Aleph loves to give hugs and receive them.


VAV is the 6th letter, has a numerical value of 6, is constructed of a single vertical line, means HOOK and makes a sound like the V in Victory. When used as a vowel, Vav can sound like a long `o’ or a long `u.’ Translated it means AND. It is the GREAT CONNECTOR. Vav appears in the Four Letter name of God - Yud Hey Vav Hey.
“VAV is the sound if beiing joined. And VAV is a the sound of and. One and another” (Kushner, Lawrence. 1990. The Book of Letters: Sefer Otiyot.Woodstock: Jewish Lights Publishing. 35).

What does the letter VAV resemble? It is alluded to in the verse “He spreads out light like a garment” (Psalms 104:5). For VAV is nothing other than six directions [ east, west, north south, up and down]? (Kaplan, Aryeh. 1979. Tr. The Bahir. York Beach: Samuel Weiser. 30).

The first word in Torah is Bereshit which t means IN A BEGINNING. If you divide Bereshit into bara and sheet it means HE CREATED SIX [sheet is 6 in Aramaic] Six what? The 6 days in which creation was completed? (Zohar . 1984 Tr. Harry Sperling et al. New York: Soncino. 1:3b. 13).

When used as a vowel, Vav can sound like a long `o’ or a long `u.’ Translated it means AND. It is the GREAT CONNECTOR. Vav appears in the Four Letter name of God - Yud Hey Vav Hey
“VAV is the sound if beiing joined. And VAV is a the sound of and. One and another” (Kushner, Lawrence. 1990. The Book of Letters: Sefer Otiyot.Woodstock: Jewish Lights Publishing. 35).

In meditation, the Vav is a place where you can leave your body in order to descend to a deeper place.


Resh is the 20th letter of the Hebrew alphabet, has a numerical value of 200, makes a sound like the R in Radiant and means BEGINNING or HEAD. When one spells out the letter Resh in Hebrew, it is Resh Yud Shin. Yud and Shin spell Yesh - THERE IS. The letter Resh means BEGINNING. So it is possible to say that the Resh literally means THERE IS A BEGINNING.

The Resh looks very much like the Dalet. The only difference is that the right angle of the Resh is a rounded 45-degree angle. The horizontal line of the Dalet has a little foot that extends backwards toward the Gimel. Talmud cautions us not to mistakenly write the Dalet as a Resh or the Resh as a Dalet (Shabbat 103b).

“Kuf [stands for] Kadosh [holy]; Resh [for] Rasha [wicked]: why is the face of the Kuf averted from, the Resh? The Holy One, blessed be He, said: I cannot look at the wicked. And why is the crown of the Kuf turned toward the Resh? The Holy One, blessed be He, saith: If he repents, I will bind a crown on him like Mine. And why is the foot of the Kuf suspended? [To show] that if he repents, he can enter and be brought in [to God's favor] through this [opening]. This supports Resh Lakish, for Resh Lakish, said: What is meant by, Surely he scorns the scorners, But he giveth grace unto the lowly If one comes to defile himself, he is given an opening; if one comes to cleanse himself, he is helped” (Shabbat 104a).